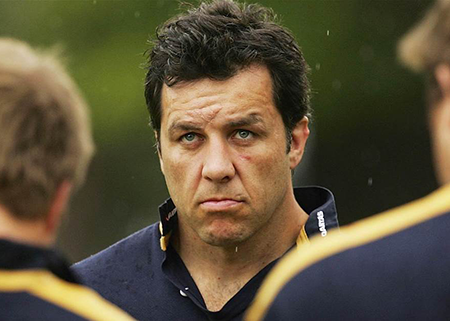 Brendan brings wealth of professional, sporting and personal experience to his speaking engagements. He is a principled individual and happy to ‘go the extra mile’.

Brendan Cannon was a tough no nonsense style of footballer who earned every one of his 42 test and 106 Super 12/14 caps, often playing with injuries.

When the team Gladiator hit the screens, Brendan’s team mates immediately christened him Maximus – so closely did they think the then Wallaby hooker resembled its star Russell Crowe.

The greatest irony of the hooker’s reputation as a battered warhorse is that none of his significant injuries came while playing on the field. Instead, a near-fatal car accident when he was just 20 was the cause of his ill health. When Brendan Cannon’s Ford Festiva was forced into the path of a semi-trailer, he was left with about 50 stitches in a jagged wound from his forehead through his right eyelid, a fractured hip socket, a badly lacerated elbow and ruptured knee ligaments.

Brendan is a highly educated individual, continuing his studies over a 14 year period to acheive the following:

Since his retirement from Rugby Uinion, Brandan has been invovled with a number of pursuits including nearly 7 years with the Fox Sports commentary team, various management and directorships within the corporate sector and 8 months in Lae, PNG as General Manager of a telecommunications company before settling back in Brisbane as Asssociate Director of CBRE.