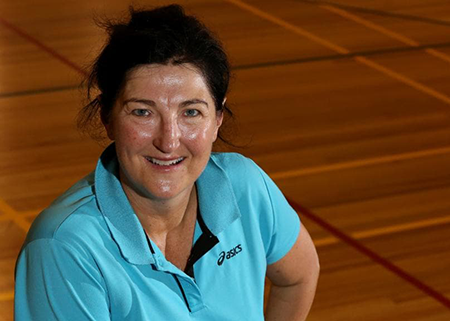 Vicki was a part of the Australian national netball team for fifteen years, making her debut in 1985.

Vicki became an A grade player for the Hytec Club when she was sixteen and still at school. Originally a defence player, Vicki always wanted to be a goal shooter.
Vicki then joined the Police Youth Club team. At the Under 19 championships, she was identified by the Australian Institute of Sport as a player they hoped would join them.

However, Vicki was still a student in the Physical Education course at the Queensland University of Technology and decided against the move from Brisbane to join the Australian Institute of Sport for more than a year.

Vicki was among a new generation of women players who were determined, even aggressive, on the court, but once the game was over, relaxed and enjoyed themselves.
• Vicki first played for Australia in 1985, when she was twenty.
• She continued to represent Queensland as captain of the Firebirds team in the national league competition, a challenging position because many of the team in the early days were young and inexperienced.

Leadership and continual education is very important to Vicki Wilson.
• In 1992, Vicki moved from teaching at school to the position of Schools Sports Promotions Officer with the Department of Education in Queensland.
• She also captained the Australian team to inaugural Commonwealth Games netball gold medal in 1998.
• Both as a player and a coach since her retirement from representative sides in 1999, Vicki believes that teaching the players new ideas and skills week by week, and feeling for them, is important in helping them to achieve their potential.
• During her representative career, Vicki put her ideas and her degree in Physical Education into effect as a teacher in secondary schools.
• She believes she has much to contribute as a role model for younger girls.
• At the time of her retirement from representative sport, Vicki Wilson was the world’s greatest goal shooter in netball and the only Australian player to have played in four world championships.
• Vicki has always been committed to the future development of the sport she loves.
• She was the Founder and coordinator of the Secondary Schools Netball championships. As well as her coaching activities, Vicki Served for ten years as a board member of Qld Academy of Sport & Stadiums.

In May 2013, Vicki was named as the new assistant coach for the New Zealand Silver Ferns until the end of 2015.

In June 2016, she signed to coach the Netball Fiji side for three years, leading up to the Gold Coast Commonwealth Games in 2018.

Vicki Wilson relishes all challenges and believes strongly in recognising good opportunities. She continues to coach and mentor talented players and is currently a senior project manager with the Queensland Events Corporation in the Department of the Premier and Cabinet.

Vicki was awarded the Medal of the Order of Australia in 1992, named Queensland Sportswoman of the Year in 1993, presented with the keys to the city of Brisbane in 1999, awarded an Honorary Doctorate by Griffith University and inducted into the Sport Austalia Hall of Fame in 2004. All were personal thrills and important milestones for the recognition of netball