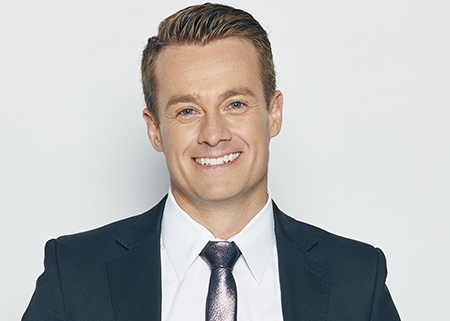 Grant’s true passion as a young boy was motor racing. He began tearing up the family farm in a go-kart from the age of 7, and decided he wanted to race professionally.

Chasing this dream was an expensive one, so he decided to enter the media industry to help find commercial backers for his motor racing winning on track was one thing, however as it turns out, winning prime television ratings was also a big bonus! After completing school in Melbourne, Grant secured a position at Prime TV in Wagga Wagga as a cadet journalist.

In 1999, Grant was offered a position at Network Ten, as a full-time news reporter. With his extensive racing background and obvious talent on camera, he was quickly given the opportunity to work on the station’s V8 Supercar coverage as a pit reporter, while covering extensive stories as part of TEN’S National News coverage. Channel Seven Sunrise Executive Producer Adam Boland was looking to re-launch the SUNRISE programme, and stumbled across a very young Grant Denyer while channel surfing during the search for fresh new TV talent. He offered Grant a full time role as the Sunrise weatherman with a simple brief do you want, but make the weather as entertaining and different as you can. Live TV 5 days a week, even with the 3 am starts, this was very tempting, so Grant jumped Networks, bought an alarm clock, and started travelling!

He remained in the high demand Sunrise role until the end of 2006, creating many firsts in Australian Television through this time, including breaking a Guinness World Record by Bungee Jumping from a Helicopter over Bondi Beach while on air, passing out while delivering the weather report LIVE at 12G in a Red Bull Air Race plane, swimming with Great White Sharks off the South Australian Coast, lasting a round against Boxing Champ Danny Green, spending all four hours of SUNRISE broadcasting live from a roller coaster, non stop, (another world record) and being stuck on top of yet another roller coaster with former AFL legend Warwick Capper! (Easily his toughest and most demanding assignment yet!)

In 2005, Grant won the fourth series of Dancing with the Stars, surprising many with his dancing skills and cheeky, cleverly choreographed routines with dance partner Amanda.

In 2014, Grant joined Network 10 as the host of the revived television classic Family Feud. Family Feud has a regular audience of metro and regional viewers in excess of 1 million viewers each night, making it Australia’s number one game show. In his fourth year as host, Grant is quickly approaching 1,000 episodes with the show. In 2016 the format also saw the creation of All Star Family Feud a spin off which sees celebrities compete in teams to raise money for their chosen charity.

Grant is your typical down under bloke, – that all women love, and all men would love to have a beer with…even if it’s just to talk about how good Lowndesy is as a driver! He thrives on adrenalin filled activities, has a knack for communicating the excitement direct to the home lounge room, and has pioneered new technology and methods to change the Live TV game forever. Grant and his young family reside on a small farm on the outskirts of the country town of Bathurst in NSW. He married Television Producer, Chezzi Denyer on Hamilton Island in 2010 and the couple have two children, Sailor Denyer (6 years old), and Scout Denyer (2 years old).

In March 2017 Grant was nominated for the Gold Logie Award for Best Personality on Australian Television, a tribute to his hardworking nature.